Book Review: The Art of Learning 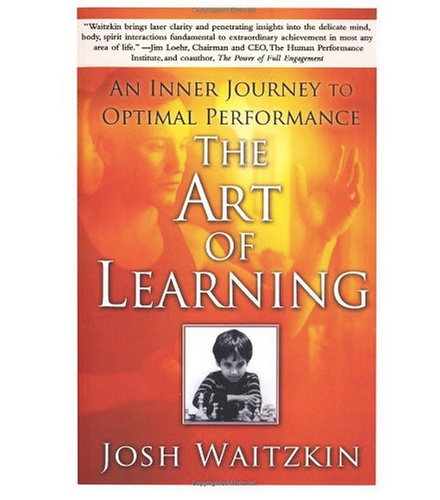 Tim Ferriss, as part of his book club featuring books that dramatically impacted his life, said Josh Waitzkin’s The Art of Learning is one of the books hedge fund managers have on their bedside tables.

After reading it, I can see why.

Like Ferris, this book will go down as one of the best self-improvement books I have ever read. It’s completely free of woo (woo, noun, Ideas considered irrational or based on extremely flimsy evidence or that appeal to mysterious occult forces or powers), and while Waitzkin has a technician’s mind, he details the learning process with concepts that are easy to understand and backed up with his own life experience.

If you just skimmed this book, you’d think this is a biography of Waitzkin himself, who at a very young age was a national chess champion. In fact, Waitzkin’s father wrote Searching for Bobby Fischer, a popular book that was made into an even more popular movie.

After Waitzkin’s chess career ended, he applied his learning methods to the martial form of Tai Chi Chaun, called Push Hands. His process led him to several championship titles there as well.

So here we have a guy who excelled and dominated in chess, an inner game that is played almost entirely in the mind versus an opponent who is playing the game in his mind. We also have a guy who quickly moved to the elite levels in one-on-one martial arts combat, where guys are throw into the air and on to the mat violently.

It is, until you realize the Wet pour is about how to learn and excel at anything you do: sports, financial management, enterprise IT, you name it. Chess and Push Hands are just the vehicles Waitzkin uses to deliver his lessons. Here’s a video overview of the book:

As I get older, the more I realize that it’s critically important to be vigilant about two things:

2 is a post for another day, but learning is something everyone can do. Expanding oneself to become a competent chef, or more fit, or able to understand a philosophy (like stoicism, for example) is food for your life. Those who are at the top of their fields remain curious and open to learning, because they know if you stop learning because you think you have it figured out, you have lost.

The Art of Learning is a smart, approachable book best digested in small chunks, because it sticks with you. You think about it a lot. Don’t be surprised if it re-ignites a passion for learning or expanding your knowledge in just about anything. I know it did for me.

“The more I learn, the more I realize how much I don’t know.” – Albert Einstein